Governments around the world are edging toward plans to exit mass population lockdowns, albeit at different speeds and in different ways, but the persistent questions for business are around what the future holds and how it should be navigated.

In response, Nielsen has identified three distinct time horizons for global market regeneration beyond the novel coronavirus (COVID-19) global health emergency and attached likely scenarios to each. The three-tiered framework identifies the conditions for businesses to Rebound, Reboot or Reinvent as they confront expected unprecedented recessionary conditions.

With trillions being pumped into economic stimulus packages, yet thousands still dying of COVID-19 and some countries confronted by the prospect of ongoing population lockdowns, the question of how to reconfigure economies is significantly dependent on the behavioral changes taking place among the world’s consumers.

Nielsen’s global intelligence team has undertaken an initiative that takes into account global macro conditions such as unemployment, bailout packages, and interest rates and ties them to ongoing FMCG sales and attitudinal inputs from consumers around the world. From there, the team examined common threads of consumer behavior that tied to how the disease was being managed and the response of governments to support citizens through health and financial care.

The findings led to three horizons being established that reveal significant new and adjusted consumer behaviors that will lead to different types of demand in terms of what, where and how consumers make purchases. They also point to a series of common characteristics likely to be exhibited by consumers over time. All of these are based on the conditions currently in play to manage the virus on a global basis.

“Much has been made of comparisons to the 2008 global financial crisis, but this situation doesn’t make for accurate comparisons. The circumstances back then were fundamentally different,” said Scott McKenzie, Nielsen Global Intelligence Leader. “Thousands weren’t dying each day, millions weren’t locked in their homes indefinitely, businesses weren’t ordered to close their doors, kids were still in school. The impact of this will be profound and more far reaching than anything we’ve seen in our lifetimes. The pace of change is also extraordinary.”

The new Nielsen framework extends a set of six consumer behavior threshold levels that provided early signals of spending patterns during the first three months of the health crisis. It lays out three possible timelines for each of the scenarios:

“The world is fundamentally recalibrating right now. Consumer habits are changing at pace and understanding those changes, in the context of these scenarios, will be critical as businesses prioritize how they too recalibrate to meet the changed circumstances driven by COVID-19,” said McKenzie.

The framework points to a series of behaviors and habits that will be accelerated in each of the scenarios. In some cases, changes that may have taken years to evolve could be in place in a matter of months.

Already, this year, Nielsen has tracked significant changes to the ways people shop and the ways they think they’ll behave after the COVID-19 crisis comes to an end, particularly with regard to technology and the use of digital platforms.

Taking advantage of Nielsen’s global footprint, the intelligence team was able to shape the new framework by also taking into account consumer sentiment, such as that measured in Europe, where many expect the impact of COVID-19 to be long lasting. And to test hypotheses using data out of markets such as China and South Korea that are further along in dealing with the disease and its impact. 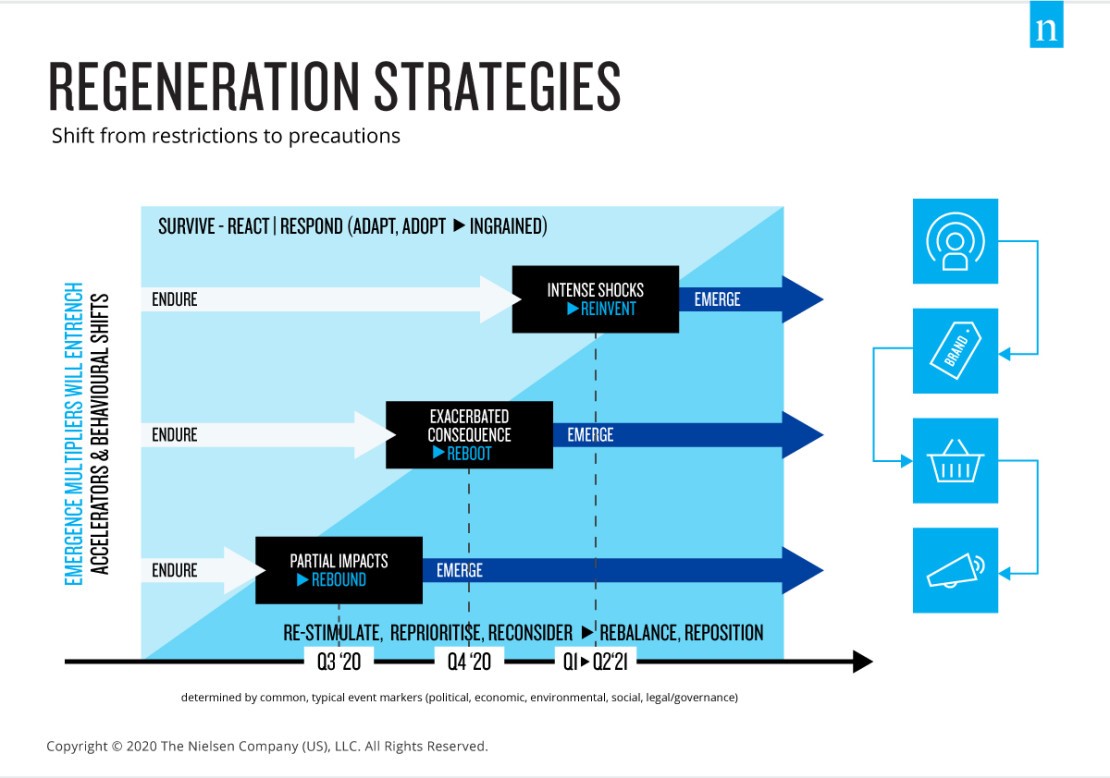 In each horizon identified by Nielsen, a different set of factors and respective consumer behaviors can be identified.

In horizon No. 1, “Rebound,” a series of health indicators, actions by governments and business, and market conditions point to a rebased “normal” that has some of the following as a societal response: 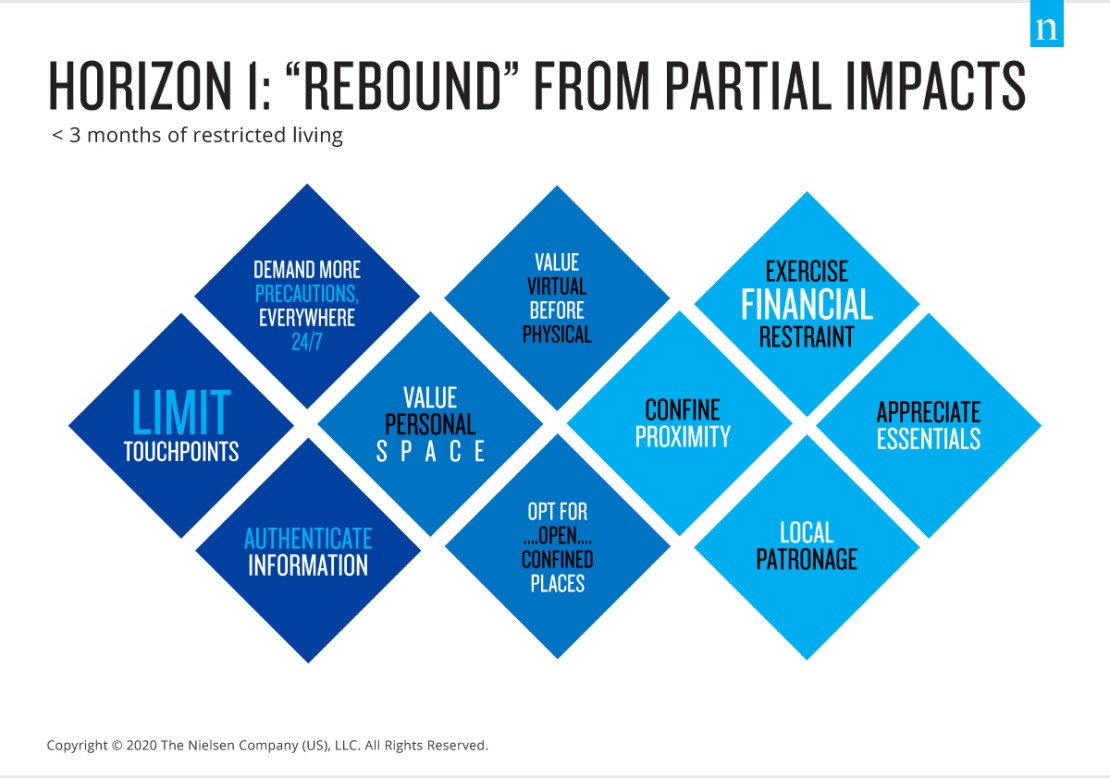 In horizon No. 2, “Reboot,” the societal response has a different set of focal points and positions the economy for meaningful regeneration toward the end of the year. 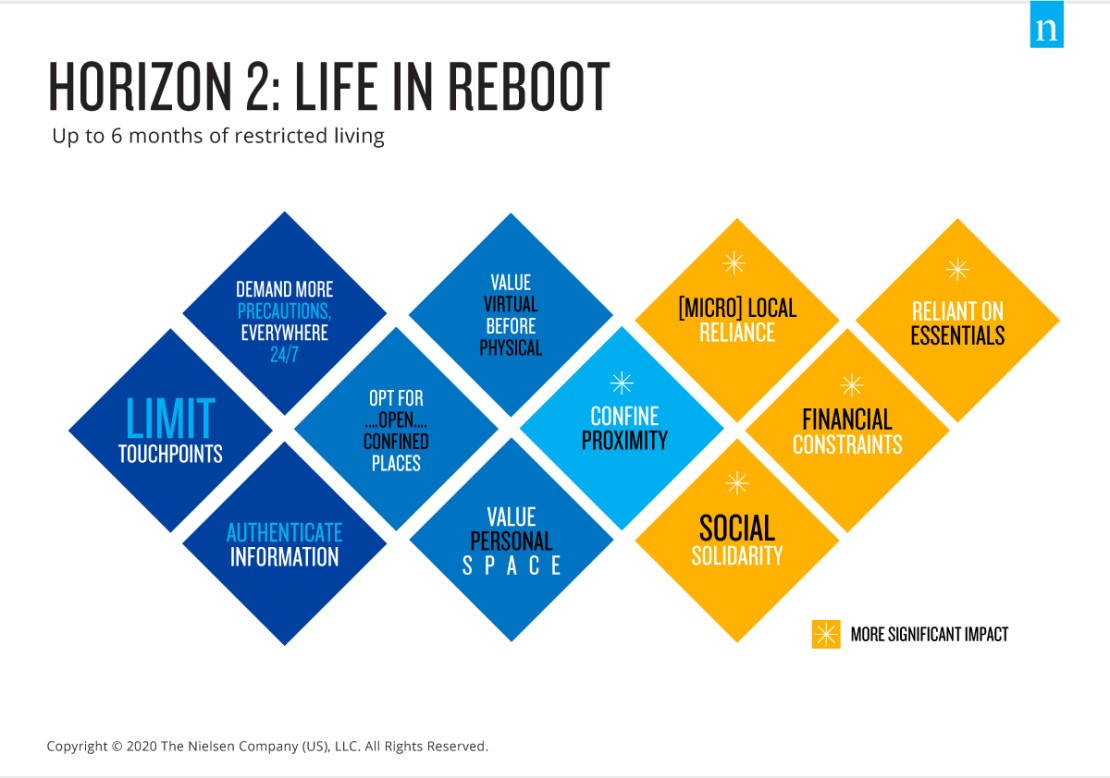 In horizon No. 3, “Reinvent,” as the name suggests, a complete reinvention is required and may not play out until the first half of 2021. The consumer behaviors and characteristics are sharply amplified compared to horizons No. 2 and No. 3: 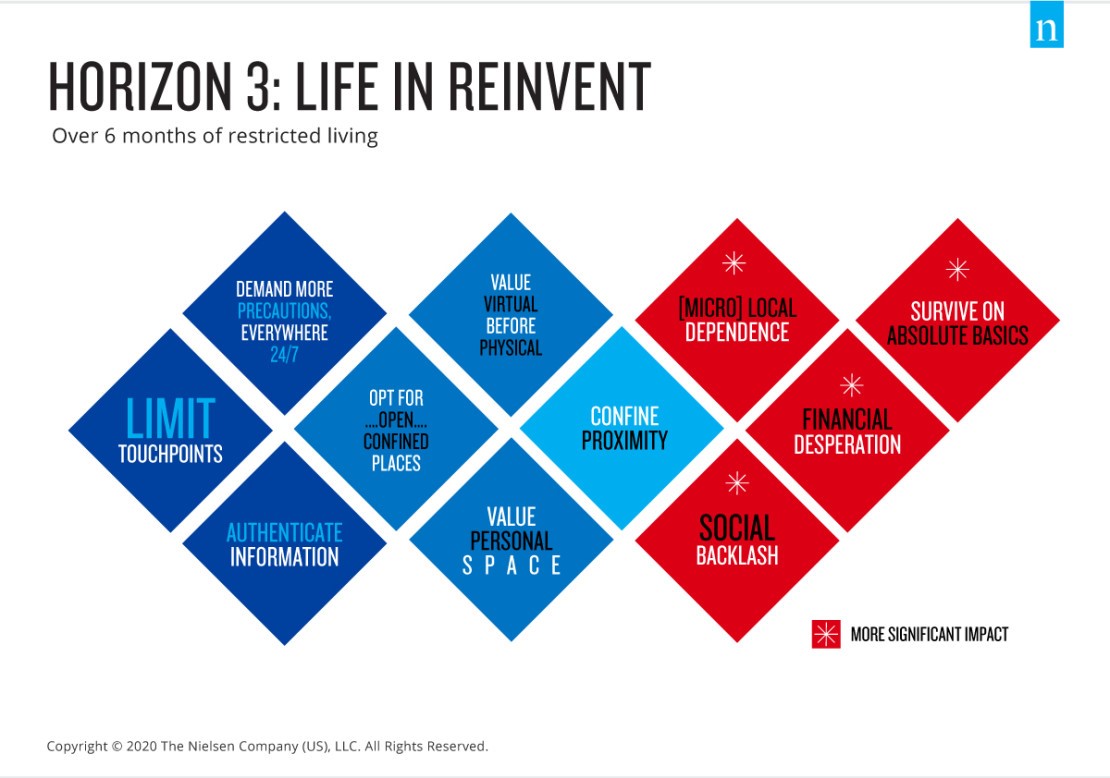 With each of these time scenarios, the baskets of shoppers will also change. The repertoire, pack sizes, brand choices, product origins and more will be reconfigured as shoppers adjust to changed economic circumstances and a sharper focus on their health and safety.

Two clear sets of consumers will also emerge – those with insulated levels of spending, often those who have maintained employment and remain shielded from day-to-day economic impact and those who will be restrained in their spending habits due to unemployment, furloughing or other COVID-19-related challenges.

This polarization of spending is expected to drive new considerations for retailers and brands as they urgently examine the range of products being offered and the pricing dynamics within.